The capital of the Czech Republic is located in the northwestern part of the country. Prague lays on 7 hills and stretched in 48 km on both sides of Vltava. Vltava is a navigable river. On Vltava sailing sightseen and cargo ships. There are more than 10 bridges and some docks.

Prague Castle – is the biggest fortress in the Czech Republic, which is placed on the hill on the left bank of Vltava river. That is a big historical, political and culture center of the country which was founded in IX century. To the castle from Hradčanská square guide front gates, where there is a guard of honor.

Wenceslas square – is placed in the heart of Prague. Tourist, which come to the capital of the Czech Republic eventually will get to it, even though do not set it as a goal.

Charles Bridge – connected areas of an Old and New town – on of the main sightseen in Prague. In the description of this bridge come to the mind only superlative adjectives – the most famous, the most beautiful, the oldest. The building of the bridge started in the year 1357 at the direction of imperator Charles IV.

Saint Vitus Cathedral – one of the brightest symbols of the city. Its history started from the year 1344; nowadays there is a residence of Prague’s Archbishop.

Old Town square – is famous from the XII century when there was a crowded market, collected on its square many artisans, traders, merchants of goods from different countries. The square is surrounded by architectural masterpieces.

The dancing house – is an architectural monument in the in the spirit of deconstruction, which is dedicated to the pair of dancers and calls heated debates and argues of critics, architects and ordinary citizens.

The national theatre – the main theatre in the Czech Republic and in Prague. The theater consist of those artistic ensembles as opera, ballet and drama. The theater was founded in the year 1881.

The national museum – the biggest state museum of Prague, which was founded in the beginning of XIX century. The building of the National museum with the height more than 70 meters and the length of the façade about 100 meters was built from 1885 until 1890 years. His author is Josef Shultz. The building overlooks to Wenceslas square and is its architectural attraction.

The Church of Mother of God in front of Týn – this church is noticeable in each weather from each place in Prague, dressed by rays of the sun in gold decoration, or Church of Our Lady, counts already seven centuries. Its two pointed towers are the symbol of Prague, which is towering over red proofs.

Vyšehrad – it is the oldest district in Prague, located on Vltava bank on the top of rocky hill. Vyšehrad is called a rival of Prague Castle. According to the legend, Vyšehrad (future Prague), was founded by Krok, the son of Czech, the founder of the country. Vyšehrad became a place of residence first Czech princes.

Golden Lane – is a street located at the Prague Castle. Its name is connected with jewelers, which lived there. This street is consists of tiny and toy houses, which recall Prague architecture.

Prague Aqua Park – It is well known, that in Prague each showplace is a castle or a palace. So the aqua park in the capital of the Czech Republic is also called “AquaPalace”.

Prague ZOO – one of the biggest zoo in Europe. A lot of tourist during their visiting to Prague try to visit this famous zoo, which was opened in 1931. 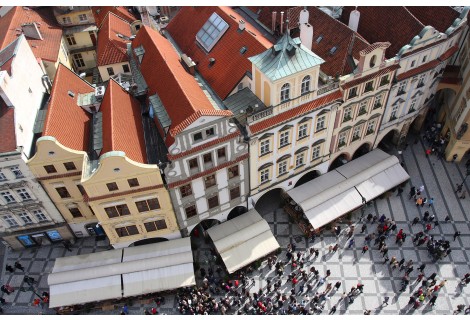